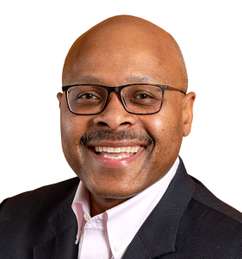 As the Chief Executive Officer of OneTen, Maurice Jones draws on his deep leadership experience in the public and private sectors to spearhead the coalition’s mission to create 1 million careers family-sustaining jobs for Black talent in America over the next 10 years.

In his role as OneTen’s first CEO, Maurice leads the efforts to establish the coalition’s capabilities and elevate its reach and impact while reimagining how business leaders come together to effect positive social change and create a more equitable society.

Before joining OneTen, Maurice served as the President & CEO of Local Initiatives Support Corporation (LISC), one of the country’s largest organizations supporting projects to revitalize communities and catalyze economic opportunity for residents.

Prior to joining LISC in 2016, Maurice served as the Secretary of Commerce for the Commonwealth of Virginia, where he managed 13 state agencies focused on the economic needs in his native state. He has served as Deputy Secretary for the U.S. Department of Housing and Urban Development (HUD) overseeing operations for the agency and its 8,900 staff members, and was Commissioner of Virginia’s Department of Social Services and Deputy Chief of Staff to former Virginia Governor Mark Warner.

Trained as an attorney, Maurice worked under the Clinton Administration on legal, policy and program issues at the Treasury Department, where he also helped manage a then-new initiative called the Community Development Financial Institutions (CDFI) fund—a federal program that has grown to be a critical supporter of nonprofits that leverage its capital to bolster their communities. In the private sector, Maurice was the general manager of The Virginian-Pilot in Norfolk and went on to become president and publisher of its parent company. He also worked for a Richmond law firm and a private philanthropy investing in community-based efforts to benefit children in Washington, D.C.

Raised by his grandparents in a rural southern Virginia community where his family had a tobacco and corn farm, Jones was awarded a full merit scholarship to Hampden-Sydney College, a small liberal arts school. In 1986, he graduated Phi Beta Kappa and was selected as a Rhodes scholar. At Oxford University, he earned a master’s degree in international relations. In 1992, he graduated from the University of Virginia Law School.